Our loved ones in The Beyond have ingenious ways to attempt to contact us. Many of us cannot see or hear them visibly, as is the case with me, so SAL comes to me telepathically and as Nudger-in-Chief. SAL visits in many forms including as a pee wee/little magpie/mudlark that frolics in the bird bath on the deck near my window, and she fiddles with my electronics turning the TV on to appropriate songs and information.

SAL adores Nature and has a particular love of dogs, cats and birds. She visits two dear friends in the guise of a magpie. SAL has always loved the song and antics of magpies. She explains it like this. A homeopathic drop of my essence over-lights the bird, and even though it's so tiny, it actually contains the essence of all that I am.
​ 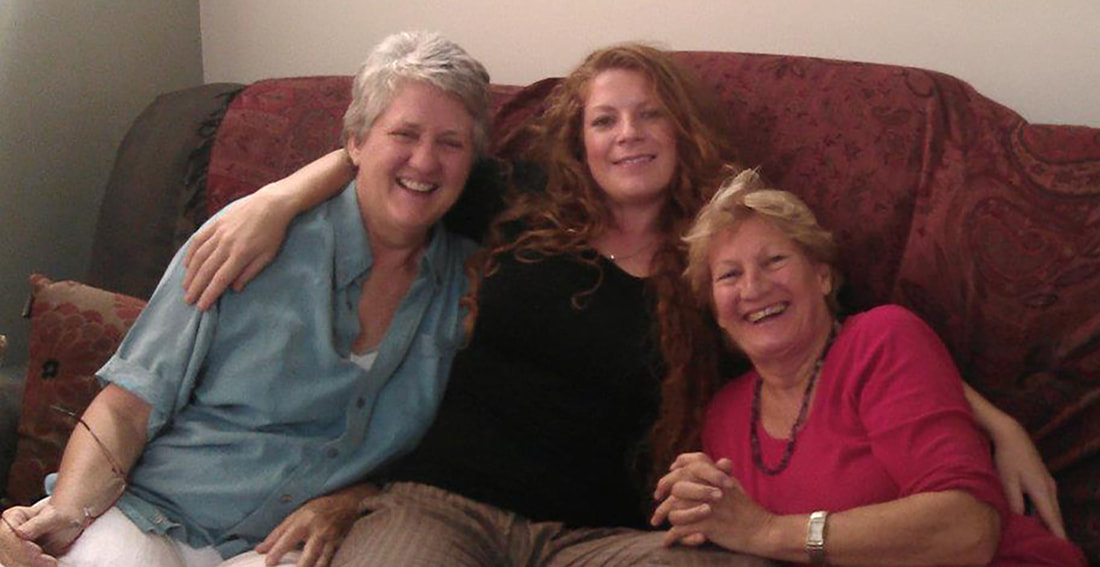 Cedar, Sally and Helen 22 April 2012
Sally and I shared our dear friend Helen's home in Valla Beach for a short time in 2012. It was there that Helen and SAL came to know each other at a deep Soul and laughter level as they both have beautifully evolved Souls and zany humour.

Tragically around that time, Helen fell off the roof while cleaning gutters and hit her head badly in the fall and gradually developed Parkinson's as a consequence. Helen consciously works on totally healing her illness and now lives on the Central Coast NSW and was visiting an old friend for a day just three minutes from my home, so we caught up for a few hours revisiting her once home and favourite beach and paperbark forest.

We both felt SAL's effervescent presence right at the beginning, and we had a three-way conversation with SAL making comments via Helen's gift of mediumship and offering sound advice on all manner of subjects. We laughed and cried during our delicious lunch at a local restaurant.

I felt SAL had orchestrated this important visit as a great deal of personal and private subjects were discussed for both of us some of which related to both Helen and I 'opening our hearts one more time to love' with specific directives for each of us.  SAL humorously sang the Daddy Who song 'Come Back Again I'm Just Crazy About You Babe.'

I asked 101 Questions of course and here's an outline of some of the subjects we discussed - I trust my shorthand will be understandable Dear Readers. I present this collation in the hope that it will reassure all who love SAL, and to give suggestions to those with loved ones in 'the next room'.

SAL is now wavy energy. She says: It's so good to have a body.

​Helen sees SAL as wavy energy though she takes on a recognisable form for purposes of the conversation and appeared to Helen much like she was in the above photo at age 33 in 2012.

SAL comes in many forms, and her most recognisable symbols are sunflowers, rainbows, birds and through relevant songs. Helen says: 'So that's why I've been getting such a strong urge over and over to plant 20 sunflowers!'

To address the rash that comes as a painful side effect of the Parkinson's medication SAL prescribed aloe gel to be added to her green smoothies and to be applied directly to the rash, and to drink herbal teas instead of coffee. She said - 'Like Lazarus, you will be healed and risen - you were crippled and now you’re made whole.'

I explained how SAL comes to me as a peewee to frolic in the birdbath and play on the deck in front of me. She always appears whenever I'm writing or creating something we deem as important such as now as I write these messages. Helen explained how 'the homeopathic drop' is true for her too as a 'drop of Sal's essence enters me in the heart centre, and I can feel her energy and speak her words precisely. She likes me to relay her words exactly as she says them.
Sally approves that we've met and are talking about her. She is listening to who is speaking, and says  'It's magic here', and that she is alive - though not in the same sense as we've known her but in a lighter side of herself which is her essence. The magic happens down here as well, and we're all alive, and we're all in a play.

If you want to do mirror work - look in the mirror and smile at the two parts of yourself. In this see the Soul and your inner child in the other and talk to both eyes/aspects individually. So you're talking to your knowing self, and in the other eye, you're talking to your little child. Embrace her with a smile, with love and give her warmth and gratitude - even though she missed out on those things as a child - she's happy to be alive. She needn't have come, though she saw fit to change things and work on herself, so she's happy and content now. Love yourself even more. When you're tired rest and when you're full, let it out. Rest as much as you can to get ready and play and walk on the beach.

Sally's grandmother sings the Souls up when loved ones pass through to the Other Side. Grandma was there when Sally passed over amongst others. The 4 were together in past lives. They have reversed the cycle of living, and they'll meet you on the other side.

'Starry Being' is one of the 4 - one of 'The Inhibitors' - i.e., stops you in your tracks until you learn your lessons, then you move forward. So you go into a waiting zone or realm before you move forward. SAL's Grandmother sings the Souls up to this place where they work with you in the Light. They do work on the Soul level.

The atmosphere is different from where Sally is. It's so expressive where she is, and manifestation is instant so she can be the bird or rainbow or whatever she chooses. They sing and dance and play and laugh a lot. She's blooming. She's getting really good at creating.

On 25.10.2018 I had a curious experience with a television that mostly remains unused in my bedroom. I live in a large home by the sea with two dear friends, and we have 4 televisions mostly for watching movies and documentaries. I was home alone and relaxing in the lounge room binging on a fantastic British TV series called 'Bodyguard' when I heard the Beatles singing 'Yellow Submarine'.

I thought it might be coming from a passing car - nope - other direction. When I went to investigate further, I found the TV in my bedroom had turned itself on and was playing a google music video - which I never use. My room is 40 good steps from the lounge room. Then there was a second song that I was too absorbed in the mystery to ascertain followed by 'Here Comes the Sun'. This is the same Sun that I check in daily with, meditate upon and generally have a jolly good time with for all manner of esoteric reasons.

Who on Earth turned the TV on? I did some sleuthing as my housemates have another home and were staying there. I wondered whether they may have somehow turned google music on remotely so I rang them - and they were innocent!

All throughout this episode, my thoughts were on SAL, yet I wanted to rule out any other possibilities. Her mischievous presence confirmed that she did in fact do it as she was adept with electronics while here - and she informs me 'I'm a REAL whizz over here. Delve deeper Pru - no not on The Beatles, on the SUN!'

​Friends and acquaintances who want their questions answered might also like to take note - radio and television are other effective ways to connect with SAL.
Please click or write Sal or Sally in the search box top right for many more Adventures with Sal.